Transjugular Intrahepatic Porto-Systemic Shunt (abbreviated as TIPSS or TIPS) is a procedure used to reduce portal hypertension, a condition that often affects patients with severe liver disease. Normally, blood flows through the liver from the esophagus, stomach, and intestines. When the disease has damaged portions of the liver, blood flow is often blocked, which increases pressure on the blood vessels feeding the liver, often to the point of causing them to rupture. This can cause intestinal bleeding, life-threatening esophageal bleeding, and a buildup of fluids in the abdomen.

The TIPS procedure is performed to re-establish blood flow by creating a tunnel between two veins.

Our interventional radiologist create a shunt by first gaining access to the liver through the internal jugular vein in the neck, using fluoroscopic guidance to insert a thin needle and sheath into one of the patient’s hepatic veins, and then inflating a tiny angioplasty balloon to create a tunnel between it and the portal vein.

A stent or thin wire frame is then guided into place along this tunnel to maintain the tract between the higher-pressure portal vein and the lower-pressure hepatic vein.

Fluoroscopy or ultrasound imaging are used to ensure proper placement of the shunt, and afterwards measurements are taken in the portal vein and right atrium to ensure that pressure has been relieved. Your interventional radiologist can in most cases tell you immediately how well the procedure worked. The procedure is considered much safer than surgery because no large incisions need to be made, and has become widely accepted as the preferred method of treating portal hypertension.

The procedure will take place in a hospital, and involves an overnight stay. The procedure is performed under general anesthesia and takes about 60 to 90 minutes to complete.

After the procedure, you will recline in a recovery room for a few hours with your head elevated. There is usually no pain, but you will be monitored closely to make sure there is no unexpected bleeding or adverse effects from either the procedure or the anesthesia. The doctors may perform ultrasound testing to verify that the shunt is placed properly and that portal vein pressure has, in fact, been reduced. In most cases, if you are feeling OK you can go home the next day, although you should continue to rest.

Full recovery and return to your normal activities usually takes 7 to 10 days, after which you may be asked to have another ultrasound test to make sure the shunt is still working properly. 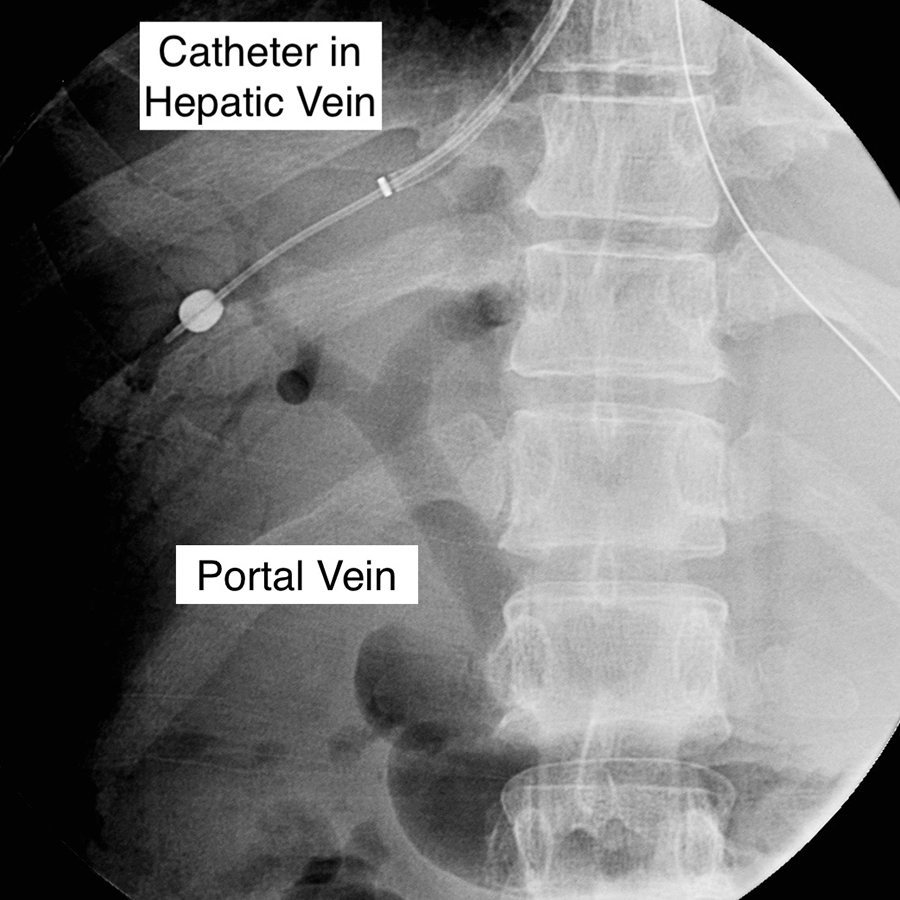 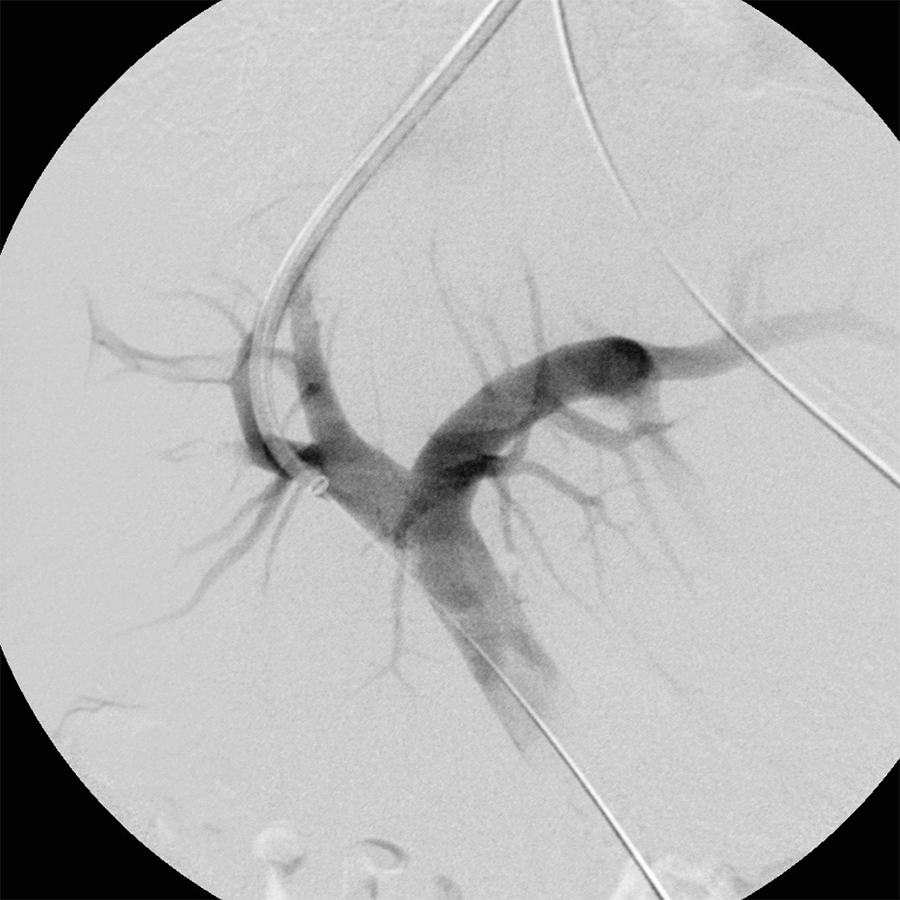 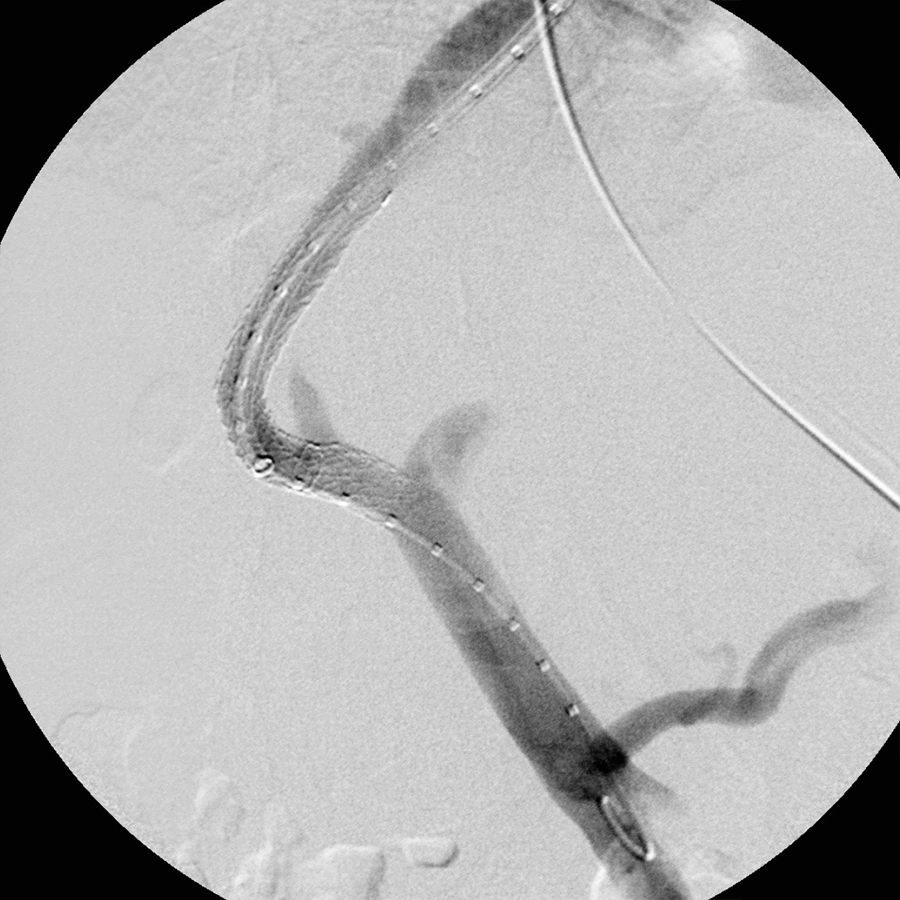 This initial image from a TIPS procedure shows the catheter in the upper portion of the image coming in to the right hepatic vein. The round white circle at the end of the catheter is a small balloon. When carbon dioxide (CO2) is injected into the hepatic vein, it quickly passes into the portal vein. The CO2 is a save contrast agent used in this procedure. The portal vein in this picture looks like a tree with portions supplying the right and left sides of the liver.

Measurements are then made between the right hepatic vein and the right portal vein. A special covered stent is that positioned between the two veins. The stent is then dilated to allow blood to flow from the portal vein directly into the hepatic vein. This is an image at the completion of the procedure demonstrating good position of the TIPS stent.